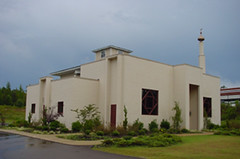 The masjid of the Oxford Muslim Society was recently built from the ground up, opening for its first services in 1999. It is situated near the campus of the University of Mississippi. Completion of the masjid was a community effort, with donations coming from numerous sources including many benefactors of the university. The masjid is a large facility with a beautiful, resonant prayer hall, several classrooms and a washing room for doing ablutions before worship. Formerly the Muslims of Oxford met inside a space on the university campus managed by the Muslim Students Association.

As the largest masjid in the state, the building that houses the Oxford Muslim Society is a prominent part of the local landscape. Oxford, Mississippi – home to William Faulkner, scores of palatial antebellum mansions and long considered a bastion of Southern conservatism – is quickly becoming an ethnically diverse college town, reflecting the steep increase of foreign students at the university. The Muslim community in Oxford consists of more than 400 people including students and their families, at least half of whom attend the mosque regularly. They originate from countries such as Egypt, Palestine, Saudi Arabia, Sudan, Jordan, Pakistan, Lebanon and Bangladesh, among others. The Muslim Student Association alone has over 100 members.

The Oxford Muslim Society provides prayer service at all times of the day throughout the week for its congregation. Jum’ah prayer and khutba are every Friday at 1:00 p.m. As the Muslims of Oxford often retreat here for prayer and discussion, the masjid is busy throughout the day with students and teachers from the town and the university nearby. The masjid celebrates all major Muslim festivals. The center usually offers language classes in Arabic and Urdu. Leadership consists of a board of five directors, but the entire community has a voice in major decisions that affect the life of the masjid.

The Oxford Muslim Society values cultural dialogue and cites community outreach among its primary goals. The Muslim Student Association hosts dinners for interfaith discussion and has invited Muslim authors to speak at the university in the past. Beyond its interfaith activities, in the past the Oxford community has sponsored summer camps for Muslim youth around the state.