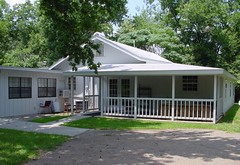 Masjid Omar, the second oldest masjid in Jackson, was founded in 1978 in the southeast end of the city. With financial help from a group of Saudi Arabian and Lebanese families that has recently moved to Mississippi, Elgenaid Hamadain established the masjid in a refurbished residential home in a quiet suburban neighborhood. Until Masjid Omar opened its doors, there was no community space for prayer and worship that appealed to Muslims originating abroad. Previously many of these Muslims had met at each others’ homes for worship. Many of the members live and work nearby. The home has been converted into a prayer room, offices, a small recreation area and a meeting room that doubles as a schoolroom for instruction in Qur’anic Arabic.

Although identifying itself principally as a Sunni congregation, the masjid welcomes all Muslims. Those affiliated with the center are largely of Lebanese and Saudi Arabian descent, including recent immigrants and individuals who are second or even third generation Americans, but the congregation also includes many members from Syria, Jordan and Palestine. Most of the members came to the United States to study or accompanied their parents during their studies. Many members of Masjid Omar teach or study at Jackson State University, located nearby, and several aim to establish a Muslim Student Association at the university soon. The center is affiliated with the Islamic Society of North America and the Organization of Mississippi Imams.

There are prayer services daily in the evening, and Jum’ah prayer begins Friday at 1:00 p.m. There are Saturday morning discussion and prayer groups for women and separate Saturday classes for children and young adults. Classes offer Arabic language study and studies of hadith and Islamic history. The khutba prayer and sermon on Jum’ah is conducted in primarily in Arabic. Masjid Omar celebrates all the major Muslims holidays and festivals, often with Muslims from Masjid Muhammad, the other masjid in the city of Jackson. Marriage, birth and death ceremonies are also performed. Eid Al-Fitr and Eid Al-Udha are among the most important holidays for the community. Members of the masjid hope to open a halal food store in the area nearby to accommodate the needs of Muslims throughout the Jackson area.

Masjid Omar began broadcasting Islamic television programs several years ago. Different members of the community air the program four days a week, usually with prayer and a Qur’anic reading. The television shows are very popular and are viewed by many Muslims who do not regularly attend a masjid. Additionally, the masjid works closely with Imam Muhammad Harusiddin from Masjid Muhammad in an interfaith outreach program that designs Islamic education talks and seminars for local schools and colleges.