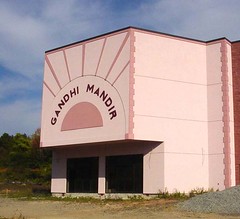 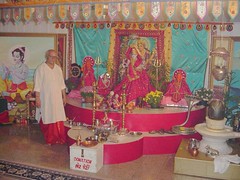 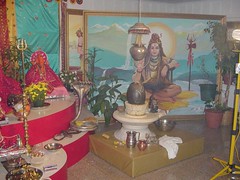 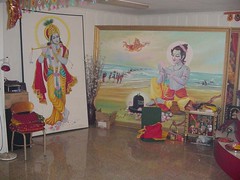 The Indian Cultural Association of NJ started in 1972 when the group sponsored folk festivals connected to Indian harvest festivals. In 1975, the executive committee decided to try and build a temple. The committee decided to name the temple the Mahatma Gandhi Mandir, because Gandhi was known for his respect of all religions. The committee intended the temple to have a broad ecumenical appeal. The committee was able to purchase a 6.5 acre property, including a residential building (3 bedroom colonial), in Wayne for $140,000. The plan has been to keep the residence on the property for a priest’s quarters, and build a new 10,000 square-foot facility; 5000 sq. ft. ground floor, 5000 2nd floor. Groundbreaking for the new facility happened 10 years ago. The committee faced an uphill battle to raise sufficient funds for the temple. In the 1980’s this effort stalled out; money was hard to raise, and different people related to the effort began to turn their personal attention and resources to other temple efforts in NJ. The most notable of these efforts were the Balaji temple, Bridgewater, the Garfield/Kearny temples, and the BAPS Swaminarayan temples. In June of 2001, however, two men who were originally involved in the early stages of the temple effort agreed to underwrite a bank loan for the temple. It is not clear yet when the next phase of construction will begin.

Despite funding difficulties, completion of construction of the Gandhi Mandir is set for December, 2003. In the meantime, the community has used the small temple set up in the priest’s house on the property. The priest’s name is Arvind Mehta. He conducts daily arthi of the images at 7 a.m. and 7 p.m. A special puja is said every Tuesday in honor of the day of the week that Lord Hanuman was born. When Mr. Mehta is away, Mr. N. B. Vora, a retired law officer from India, volunteers as the priest. The new facility under construction has worship space, banquet facilities including professional kitchen, classrooms, as well as a library for Mahatma Gandhi’s writings and books that were written about or for him. There will also be a picture gallery of photographs from Gandhi’s life. There will also be an elevator, parking, children’s play area, grand patio for outdoor events, stage for festivals and celebrations, and landscaped grounds. The current worship space includes the main image of the Goddess Durga, center, flanked by images of Hanuman and Gayatri on her right, and Ganapati (Ganesh) on her left. In front, on a lower level, is Radha/Krishna and Lalkrishna. On the sides of the main images are large paintings of Krishna, Ram, and Shiva. Average worship attendance is 10-15 people at weekday arthi, and between 100-200 people for special festivals.