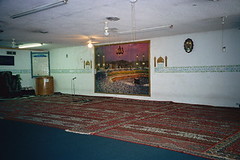 The Karbala Education Center is located along a busy commercial strip in the heart of a thriving Middle Eastern community in Dearborn, a middle-class suburb of Detroit. The strip is lined with numerous Middle Eastern restaurants, bakeries, clothing stores, and markets selling Halal meat. The Karbala Islamic Education Center, housed in a former nightclub that had been damaged by fire, contains approximately 10,000 square feet of space that have been converted into a prayer room, offices, an all-purpose meeting room, an audio-visual room, kitchen, and an area to hold a weekend school for children.

Those affiliated with the center are largely of Iraqi and Lebanese descent, both recent immigrants and individuals who have been in the country for a considerable period of time. Much of the Iraqi community in Detroit was formed as individuals and families sought refuge from Saddam Hussein following the Gulf War. One of the founders of the Karbala Islamic Education Center, Imam Al-Husainy, arrived in the late 1970’s, but did not start the Karbala Center until 1994. He and others bought space for the mosque, which presently has approximately 150-200 people affiliated with it.

The worship area at the Karbala Education Center is not typical; there are no separate entrances for men and women, no separate prayer room, or divisions on the carpet. Therefore, if women come they have to sit in the rear at tables. There are prayer services daily in the evening, and on Fridays at noon and in the evening. Other activities at the center include women’s meetings, which are held in conjunction with similar women’s groups from other nearby mosques, including the Islamic Center of America, and the Islamic Institute of Knowledge. There is a soccer team for youth, and a dating service to help individuals find suitable mates. The center sponsors occasional religious discussions, “Meeting or Better Understanding,” at which times Christians and Muslims come together to exchange ideas on different topics from the two groups’ perspectives in order to promote understanding and tolerance. Discussion topics have included the unity of God, the nature of sin and morality, and the truth of Bible and the Qu’ran. The Karbala Education Center sponsors a weekend school for children with classes in Arabic, the Qu’ran, and Arabic culture and history.

There is a museum dedicated to Islam, and a library with books and newspapers in Arabic. The center serves a vital function in the community by sponsoring Iraqi refugees and helping these newly arrivals to adjust to life in the United States and become oriented to the Detroit community. In addition, it provides a link to other mosques in the area, thereby keeping the community tightly knit and reinforcing Middle Eastern culture.