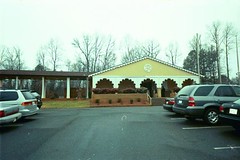 The Hindu Center, where the Jains now worship, was built in 1982; at that time only seven Jain families worshiped together. Before building the center members of the Indian community met with and surveyed members of a church directly across he street from the proposed site for the center, and with homeowners in the neighborhood to share their plans about the center. There was no resistance, which the Jains feel was probably because of the non-violent nature of the religion, and the center was constructed.

There are between thirty-five and fifty-five Jain families worshiping together at the center. They are from New Delhi, southern India and other parts of India. The worship services are conducted in Sanskrit, Hindi, and in English (for the benefit of visitors).

The Hindu Center is a large brick building that sits just off City View Drive surrounded by a gate in a residential area. Before entering the building, members and visitors must remove their shoes and place them on a rack provided to the left of the entrance. Upon entering the temple there is a vestibule, restrooms are to the right and a classroom is to the left. Double swinging doors lead to the worship area. This area is large and open. Chairs line the walls, but the people sit on the carpeted floor for the worship services. At the front of the room, there are statues of Lord Mahavir, the twenty-fourth and final Tirthankara, and other deities. Also there is a bell hanging from the ceiling and a place where people leave food as offering to the gods. There are placards on the walls near the ceiling with phrases in Sanskrit or Hindi.

Jains worship in the Hindu Center every fourth Sunday of the month. Their services begin at 3 o’clock in the afternoon and last for about two hours. The services include singing and music followed by a metaphysical discussion of Jainism, led by Mr. Doshi. The duties of leader are reassigned yearly. Jains sit facing each other during their worship service, the women on the right and the men on the left. After the singing and music, the children and young adults leave and conduct their own service. Jains have a magazine called Jiv Daya Digest. Jiv Daya means compassion to all living beings. Also the young adults are part of the Young Jain Association and they work on special projects throughout the year.

The Jain community shares a meal after every meeting. Each month there are two hosts, and they prepare the food for the meetings. The food is prepared by the women. It is an honor to be a host. Hosts usually prepare at least five items, additional items for special occasions, and birthdays, etc. Like their worship services, the Jains welcome anyone to share in their meals. Everyone who took part in the service also ate. The Jain community at the Hindu Center does not have a cookbook but they did like the idea of compiling a cookbook.