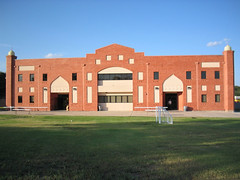 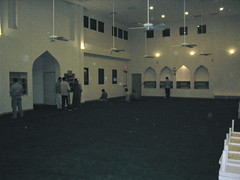 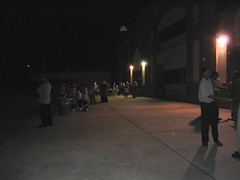 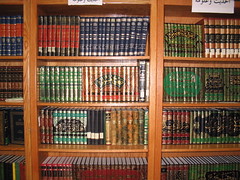 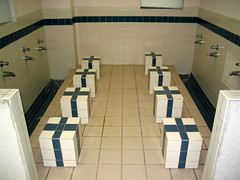 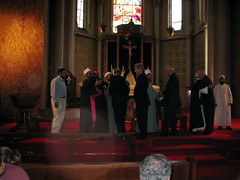 The largest service of the week is held on Fridays at 1:00 p.m. Additionally, Muslims are encouraged to visit the mosque for prescribed prayer times five times a day. The imam will always be present at these times and is available for the lay community. Prayer times are calculated using the method of the Muslim World League. A list of weekly activities can be accessed at: http://www.austinmosque.org/schedule.php.

The Islamic Center of Greater Austin built the first mosque in Austin at 1906 Nueces Street in 1988. The site was originally a house near the University of Texas campus. Prior to the construction of the mosque, Muslims near campus used a local Methodist church. By 1994, the Nueces mosque had become overcrowded and the Um-Al-Mumeneen-Sayeda-Khadija Mosque was built at 5110 Manor Road. After September 11th, the mosque has had an increase in non-Muslim visitors who wish to get a better understanding of their Muslim neighbors. In 2001, The Islamic Center of Greater Austin, along with other Austin mosques, began a series of interfaith efforts with local Christian leaders. Collaborative efforts have included projects to feed the hungry and interfaith dialogues. Members of the mosque report that Austin has been a generally supportive community. However, one Austin mosque was attacked shortly after 9/11.

In 1997, Peace Elementary School was opened at the Manor property. The Peace School serves pre-K through the 8th grade. Currently, it is the only full-time Islamic school in the Greater Austin area. The school was founded with three objectives: 1) To preserve the Muslim identity of students and cultivate in them love for Islam, 2) To provide an enriched educational environment, 3) To motivate children to strive for excellence and help them reach their full potential. The school hopes to one day teach up to the 12th grade.

About 200-300 people worship regularly at the Um-Al-Mumeneen-Sayeda-Khadija Mosque. Both African-American and Anglo-Americans visit this mosque, however, the majority of the congregation are Arabs and Pakistanis. Nationalities include Yemen, Libya, Syria, Egypt, Lebanon, Jordan, Pakistan, Bangladesh, and Iran, among others. In the mosque, all refer to each other as “brother” and “sister.” The imam is Egyptian and speaks only Arabic. During services, the imam will speak in Arabic and a bilingual will translate into English. Women are encouraged to attend the mosque. Peace Elementary currently has 100 students and is growing.

The mosque has two entranceways, one for women and one for men. Each entryway connects to a washroom that has been specially fitted for prescribed wudu (ablutions). Men use the main prayer hall while women have their own prayer room from which they can see and hear the imam. There is also a conference room for meetings, a kitchen, and a sizable lending library of Islamic texts. The Peace Elementary School (PES) is located upstairs. Children will come down to the prayer hall during prayer times. There is a lot space outside the mosque including a volleyball court and a playground for the children. In good weather, Friday potlucks and other celebrations are usually held outside.

Handouts are offered after every service with the calculated prayer times for the coming week. Copies of the Qu’ran are kept in the prayer hall and the congregation is free to study these either before or after prayer. The lending library is also available for members of the congregation. A number of courses are offered in Islamic tradition, texts, and Qu’ranic Arabic. Um-Al-Mumeneen-Sayeda-Khadija Mosque encourages community through events such as the weekly potluck. The Mosque also sponsors volleyball and soccer tournaments every year.