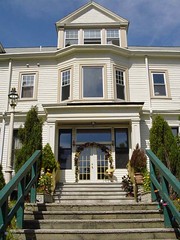 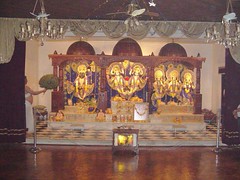 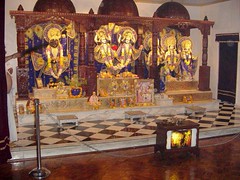 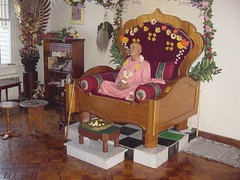 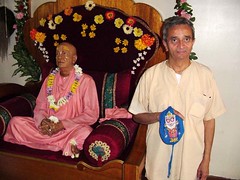 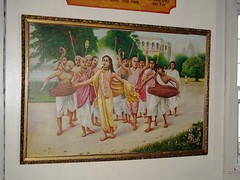 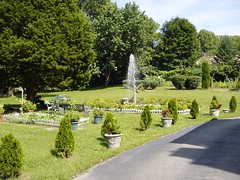 International Society for Krishna Consciousness (ISKCON) (2004)
This temple is part of the international network of ISKCON, a world-wide organization of over 100 spiritual centers, ashrams, schools, temples, institutes and farm communities in Europe, North and Latin America, Australia, Africa and Asia. The Society was founded by the late A. C. Bhaktivedanta Swami Prabhupada, who first came to America from India in 1965. After arriving penniless, and overcoming significant obstacles, he established the Society in July of 1966. The Society’s faith focuses on Krishna, and their main writings consist of the Bhagavad Gita and the Bhagavata Purana, classic Hindu texts, and their translations and commentaries that Swami Prabhupada completed during his lifetime.

In the late 1970’s, the community decided to sell its property in Manhattan, on 55 Street, between 8th and 9th Avenues. With the money from the sale, three properties were purchased in Brooklyn, Lake Huntington, and Towaco in 1981. (In the early 1980’s, the society also rented space in a storefront on Newark Avenue in Jersey City. See the profile for the Govinda Sanskar Kendra, Jersey City). The Towaco property was purchased for $168,000. Just two years ago, the community was finally granted tax-exempt status. The nearest sister centers are in New York City, Philadelphia and Port Royal, Pennsylvania.

The center is a large old house, reputed to have once been the residence of a governor of New Jersey. It is preserved by the community to serve as meeting place for community activities and the residence of a small number of celibate devotees. The grounds are scenic, with vegetable and flower gardens, sprawling lawns, and a grand landscaped staircase leading up the hill to the front door. The ground floor consists of a large foyer, with two large rooms on either side, one in which the murthis, or images of Krishna, his brother Balaram, and other deities sit behind a large velvet curtain, which is drawn during worship. Opposite these images sits a life-size statue of Swami Prabhupada, who faces Krishna in perpetual devotion. The other first-floor room is a meeting room. Upstairs are living quarters, and in the basement is the kitchen.

The Towaco center serves approximately 700 people from around New Jersey, New York, and eastern Pennsylvania. About 80% of the community is of Indian descent, the rest European American. There is a seven-member Board of Directors which holds final authority over the Towaco center. Oversight of the BoD and the governing boards of other centers in a particular geographic zone is performed by one Governing Body Commissioner. There are 4 GBCs in the territory of the US, and the GBC for Towaco oversees all of NY, NJ, and the mid-west to Chicago. The GBCs meet annually in Mayapur, India.

There are three stages of membership, or initiation, which members can go through. The first is “Hari-Ram” initiation, and the second is “Brahminical” initiation. Both demand celibacy and strict devotional adherence, but only the Brahminical initiate can perfom arthi during worship and the cooking of community meals. Some Brahminical members who have jobs perform these services on the weekends, while resident members perform them during the week. The third initiation is to “Sanyasi,” in which the member becomes a celibate monk. During the first two stages, members may marry and then become householder members of the community. Devotion to Krishna is seen as a life-long goal, and devotees are to chant Krishna’s name (“Hari Krishna, Hari Ram”) and purify their lives. They are to eat only vegetarian food that has been sanctified in devotion to Krishna. The Towaco center is planning to begin offering a “Bhakti Shastri Course,” a six to eight-month course taught by certified teachers who have themselves taken the course, passed a qualifying exam and received a diploma.
We apologize if you have been experiencing outages with our website. We are working on fixing this in the short term and we will be launching an improved website early in 2020 that will not have the same issues. Thank you for your patience!
X