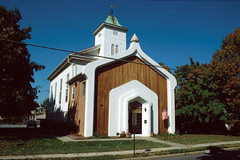 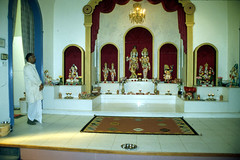 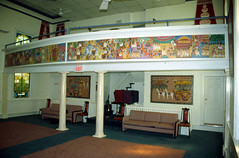 The Indian Temple Association was incorporated in the State of New Jersey in February 1976. It quickly grew to over 200 families, meeting on the third Sunday of each month at the Osage School in Voorhees, NJ. In 1982, the members of Shri Vallabhnidhi, a parallel organization with similar aims, decided to dissolve that organization in the interest of community harmony and turned over their assets to the Indian Temple Association. This influx of funds and new membership allowed the ITA to purchase a church property in Berlin, NJ, in May, 1982, for $40,000. Two previous attempts to acquire property did not come to fruition. The building was prepared for its inauguration on August 1, 1982, over which ceremony H.H. Swami Dayanand Saraswati, the community’s guru, presided. Another important figure in the life of the temple is H.H. Shri Krishna Shankar Shastriji, the head of several Parthshalas (priestly training schools) in Ahmedabad, Gujarat.

Significant stages of renovation followed, including the renovation of the social hall in the basement level in 1985, followed by the renovation of the sanctuary space and the exterior of the building. An efficiency apartment for the priest was built over the extension of the front of the building. In the sanctuary hang several striking oil paintings of Saraswati, Lakshmi, Krishna, Shri Nathji, and other deities, donated by Mr. Narendra Amin. The temple purchased murthis from Jaipur, India, and had them consecrated in 1985. Krishna and Radha are the central murthis. The image of Radha, which was damaged during transport to the US, was not consecrated until 1988. There are also mural paintings of the Mahabharata and Ramayana Epic poems hanging on the walls and balcony.

Temple hours are 7:00 A.M. to 12:30 P.M., and 7:30 P.M to 9:00 P.M. daily and from 10:00 A.M. to Noon on weekends. The temple also runs a Balvihar (child development) program, focused on language, religious, and cultural training. Other programs include yoga, Sanskrit, and art classes. The community produces a monthly newsletter with a mailing list of 800 families in the tri-state area.