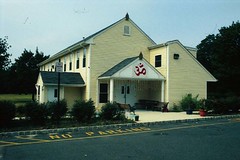 The main goal of the founders of the HATCC board was the education of the children in the culture, languages, philosophy and religion of the area Indian community. The person responsible for founding the HATCC was Raya Halemane (a Kanada Indian from the town of Udupi, Karnataka). Prior to incorporation, from 1986-87, the community held house meetings. After experiencing a period of stagnation, HATCC was organized with bylaws and incorporated in 1988. At the same time, the organization that eventually became the Hindu Temple and Cultural Center (HTCC) in Bridgewater was incorporated. During the early years, the two boards shared some personnel. At one point, the HATCC almost disbanded. About 1994, the board approached Dr. R.G. Krishnan (a well-known surgeon) to be its new chairperson.

HATCC bylaws stated that the temple should be located within a ten-mile radius of Freehold, NJ. In 1995, a real estate agent found a bankruptcy sale of a Hebrew school for $650,000. The property was purchased, four of five buildings were demolished, and the remaining building, the old dormitory, was renovated to become the temple. At this time (1995), the community met on weekends in a house temple in Mr. Guy Gundanna’s basement. The priest (Shri Krishna Bhattar), originally employed by the HTCC Bridgewater temple, was hired when he became free of his service there, and lived in a room in Guy’s house. As renovations were completed in 1998, the temple was moved from Guy’s house to the new site. Currently, the temple area and restrooms are on the ground level of the renovated site, and the priest’s quarters and classroom space are upstairs.

At HATCC’s inception, when Mr. Halemane led the effort, it was agreed that the HATCC temple would be a Krishna temple, with the idea that it would resemble the Udupi Krishna Temple in Udupi, Karnataka, Mr. Halemane’s birthplace. In the intervening years, and after Dr. Krishnan joined the effort, the style template chosen for the temple was based on the well-known Guruvayoorappan Temple in Guruvayoor, Kerala. This style of temple was settled on because of the influence of Dr. Krishnan, who is from Guruvayoor. The property and future plans for a traditional temple will cost a total of $2 million dollars. They still need $450,000 before work can begin on phase two, the construction of a traditional temple, with basement. Phase three will be an auditorium. The main architect (stapathi) will be from Kerala, or Chennai.