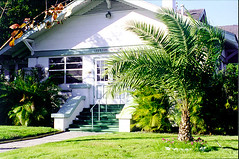 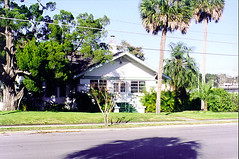 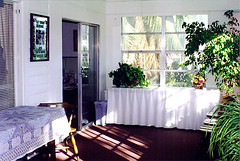 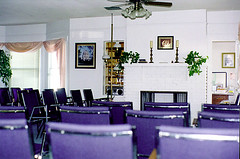 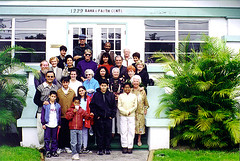 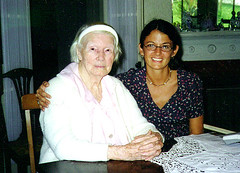 The first stirring of Baha’i activities developed in Central Florida only sixty-eight years after the inception of the Baha’i Faith. William Ripley, a devout Baha’i who was afforded the privilege of hosting Abdu’l-Baha in his home in Washington, D.C., moved with his wife and daughter to Orlando, Florida in 1912. Infused with devotion through their close contact with Abdu’l-Baha, the Ripley’s faith remained steadfast despite a pioneering status which flowed against the grain. This proved a challenging purpose at a time when Orlando was known as the “City of Churches”, and Protestant roots had formed a web of “American denominationalism” setting strong precedence. Mr. Ripley spent much of his time walking in the park, speaking with people about the Baha’i Faith, and distributing pamphlets to those who were willing to listen. Eventually, he befriended a Unitarian minister who unexpectedly conducted a Baha’i funeral for him upon his passing

The initial seed of the Baha’i Faith planted by the Ripley family in Orlando finally took powerful root at an afternoon tea held at the Ripley home just before the passing of Mr. Ripley. The tea was held for three innovative women who liked to refer to themselves as “We Three”. Extreme personal hardships coupled with the impact of the Depression led Laura Craig, Carrie Peterson, and Doris Tornstrom to begin studying the major religions of the world. They were in search of a more complete truth which they felt was absent in the denominations surrounding them. The three women became ardent believers when the Baha’i Faith was revealed to them and were instrumental in the foundation of the first Baha’i Study Classes in Orange County.

At age 95, Laura Craig remembers with a warm smile on her face the beginnings of the Baha’i Faith in Orlando. She recalls, “From 1925-1951, there were many visiting Baha’is from around the country who came to Orlando for teaching and gathering. In 1951, Mr. and Mrs. Arthur Crane came to teach the first Orange County group, and with the assistance of Mr. and Mrs. Louis Keller, formed the first Orange County Baha’i Assembly. In 1952, Mr. and Mrs. Louis Keller advertised in the Orlando newspaper that their home was now open for study of the Baha’i Faith.”

In the late 1960’s, the Spiritual Assembly of the Bahai’s of Orlando earmarked a fund for a Baha’i Center. Traditionally, establishing a center would not be a primary goal of the Bahai’s, as they meet in their homes or public facilities. However, as the religion experiences its growth and development in the United States, a need for a common gathering place has become imminent. According to Faramarz Sadri, Vice Chairperson of the Local Spiritual Assembly of Orlando, “The future will hold more Baha’i centers for Central Florida. Suddenly, in the past five or six years, this has expanded tremendously. Every month we get letters from many assemblies that are looking for Center locations.” Throughout the United States, Baha’i Centers generally try not to resemble churches, and instead, prefer an unobtrusive and neutral base for their outward appearance. Across the state of Florida, Sadri has seen Baha’i centers established in office buildings, old churches, even a transformed bowling alley, as well as new construction.

The Greater Orlando Baha’i Center follows suit as it exists in an attractive, vintage home centrally located close to the downtown Orlando area. The Local Spiritual Assembly of Orlando purchased the house in November of 1986. It was paid for in full to avoid future mortgage payments. The home was originally owned by three sisters whose father had built it for them at a time when only orange groves surrounded the area. Today, the neighborhood is alive with businesses, restaurants, and major thoroughfares.

Searching for the ideal location was a lengthy process; the Assembly visited many different buildings and considered numerous locations. Upon finding the house, Sadri said, “It was the spirit, it had a beautiful spirit, you could feel it, and we said, ‘this is it’. It had a feeling of serenity, it’s hard to explain, we just knew”. The Assembly experienced no difficulties in the establishment of the building since all Baha’i Assemblies are incorporated as administrative bodies. The incorporation allows them treatment as a business for city zoning and construction permits.
Steve Boemler, Chairman of the Local Spiritual Assembly of East Orange County, expects substantial growth in membership size this year due to Baha’i prophecy, “We expect to witness, as prophesied by Abdu’l-Baha, the ‘entry by troops’ of peoples of diverse nations and races into the Baha’i world. We are in the midst of A Four-Year by Plan, by the Universal House of Justice, our International governing body, to accelerate this process by the spring of 2000”. As the Greater Orlando Baha’i Center continues to experience growth, it will develop and expand to meet changing needs of the community, and as always, will continue to strive faithfully towards the establishment of the unity of all mankind.

The Greater Orlando Baha’i Center is open to all Spiritual Assemblies in the area, to all Baha’is, and to all humanity. Remaining in sync with the Baha’i cornerstone of unity in diversity, ethnic composition is widely diverse. At a regular Sunday study class, a visitor can encounter people of all races engaging one another in dialogue and communication that seems to bridge cultural differences. Conversation is laced with accents from Iran, Sweden, Germany, England and Canada to name a few. Age groups are similarly varied, spanning the gamut from children to the elderly.

Children are an integral part of the Baha’i Center, and regular classes are scheduled for them separate from the adults. When their classes are finished, they make their own special presentation to the adults by sharing what they have learned. The children can lead the group in prayer or song and are encouraged to participate. The Baha’i Center upholds accurate representation of their tradition, and therefore, maintains the Baha’i curriculum developed nationally.

The activities at the Center differ from month to month. While holding regularly scheduled meetings, study classes and open houses, there are also special events and social gatherings which change and may or may not take place at the Center. A Calendar of Events for the various activities is available on a monthly basis. The Baha’i Center has a high rate of interfaith involvement in the Central Florida area as well as around the globe. Its association with diverse faiths and organizations expresses the Baha’i ideals of bringing harmony to humanity and liberating the globe from poverty and war through peaceful means. Moreover, the “process” of engaging with diverse faiths towards a greater good is more important than the “end result” to the Baha’is.