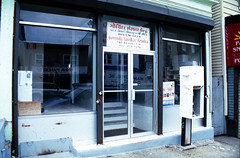 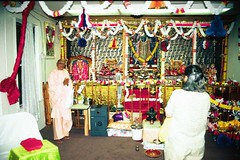 Prior to 1981 this ISKCON temple was a storefront building, with an apartment above and one behind. In 1988 the community was bought the property. In 1990 and ’91, the temple was renovated, and the back apartment was converted into the worship space.

The official priest of the temple is Harish Bartok. He was temporarily replaced by Mr. Rajendra C. Jani during the summer of 2001 so that he could take leave to go to India. Earlier priests have included Mr. Upendra Mehta, currently priest/manager of the Shree Sidhi Dham Mandir on Van Winkle, exactly one block away. Upendra was followed by Mr. Havendra, who was there for three years. He was followed by Harish Bartok.

The Govinda Mandir is a narrow, but deep worship space, that stretches from the full-glass storefront windows 150 feet back to the back wall, where the main murthis sit or hang behind a wooden railing. There are several different murthis, including Krishna Jaganath, Radha/Krishna, Sita/Ram, Ganesh, and pictures on the side walls of Krishna, Caitanya, Ganesh, and Sai Baba. Passers-by occasionally stop in front of the windows and face the murthis, lift their hands in prayerful gesture before their mouths, close their eyes, mutter a prayer, bow slightly, and then continue on their way.