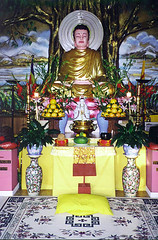 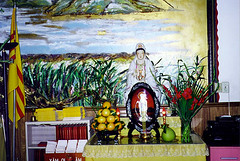 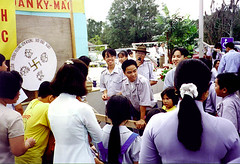 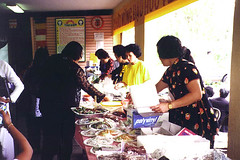 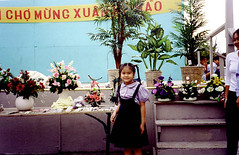 The Long Van Temple has its roots within a small group of Vietnamese refugees who came to Orlando, Florida following the fall of Saigon in 1975. This pioneering group had encountered years of struggle after their arrival in America by having to adjust to a completely new life on foreign land far from home. In 1981, they established the Florida Vietnamese Buddhist Association. As more and more Vietnamese came to Orlando, the Association was concerned with maintaining Vietnamese culture for their children, and this issue became an utmost priority for the group. Therefore, they began to make plans for establishing a center where their community could convene, worship and teach Vietnamese culture.

Finding a Center and Religious Leader

In the beginning, money and the local laws brought forth further challenges for the group to overcome before they could open the center. Yet, their persistence prevailed, donations were collected, and the search for a location without legal obstacles culminated in the building of a two-room house located in the neighborhood of the Vietnamese shops and stores on Colonial drive near downtown Orlando. It was named Long Van Temple, but it was to be only the first of two worship centers bearing the same name.

Finding a religious leader for the Temple presented another dilemma. Mainly, because after 1975, few Buddhist monks were able to leave their country. In addition, the demand was high for the monks who were in America (or could come to America) because of the large number of temples being built in other cities and states.
According to Long Van’s president, Dr. Hung M. Nguyen, the first Long Van Temple near downtown Orlando, “…became a center for Vietnamese Buddhists and non-Buddhists. Buddhists of all age groups came to the Temple weekly for worshiping. Services were in Vietnamese and were assisted by different Buddhist monks throughout the time.”

The Growth of Long Van in Orlando

In the following two years, many more Vietnamese came to Orlando, and in 1983 a group of “Buddhist activists” from the Temple decided to look for a larger lot to construct a permanent temple. They found a piece of land on Cornelia avenue directly off a major highway in East Orlando. The temple was built in the traditional Vietnamese style and completed in 1986. It is the same Long Van Temple that exists today.

The Long Van Temple on Cornelia has a “Buddha Hall” that can accommodate fifty to sixty worshipers, an office, a room for the resident monk, and other facilities including a large covered back area and stage for festival use.
A large lot next to the temple was purchased a few years ago, and again, due to the growing number of Vietnamese in Orlando, the present board of directors has decided to build a larger Buddha Hall on it. This project currently faces the difficulties due to new rules and regulations as well as objection from neighbors who argue the expansion of the temple may cause traffic problems in the neighborhood. However, as with many prior obstacles Long Van Temple has encountered, they are in the process of solving these as well. Dr. Hung M. Nguyen relates, “Hopefully, we will have a new temple in the year 2000 to celebrate the millennium.” The Long Van Temple has a full schedule of activities. They hold worship services every Sunday at noon, and their Buddhist Study Group and Youth Buddhist Group meet weekly. The Youth Buddhist Group has Dharma classes and Vietnamese classes as well as other activities such as camping, sports, and kungfu. Sutra recitation sessions are held twice monthly, on the New moon and Full moon nights. There are also monthly retreat sessions lead by religious leaders from the Vietnamese American Unified Buddhist Congress of the USA.

Yearly festivals include Buddha’s Birthday, Vietnamese New Year (TET), and the Vulan Festival on the lunar calendar. Festivals are grand events replete with games, performances, speeches and seemingly endless tables filled with vegetarian delicacies. Children are an integral part of the Temple’s activities as is evident at the festivals which are full of youths of all ages engaging in many activities. Visitors are most welcome and guaranteed a wonderful time immersed in Vietnamese culture for the day.

In October of 1999, Long Van Temple will host the Annual Meeting of the Vietnamese American Unified Buddhist Congress of the USA. Long Van remains a dedicated and active presence of Vietnamese culture and worship in Orlando, Florida, and they will continue to develop and grow according to their community needs.