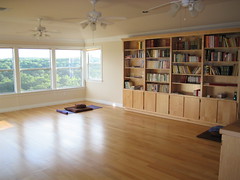 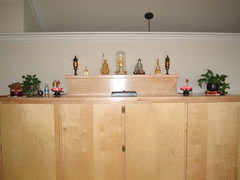 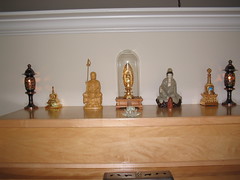 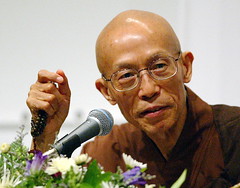 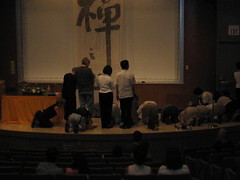 The Austin chapter of the Dharma Drum Mountain Buddhist Association meets once a week for a sitting meditation. The meditation is usually preceded by a series of eight prescribed movement forms, which help to balance the body and mind as well as enhance meditation. There are also plans for a study group in the near future, which will focus on the writings of Venerable Master Sheng-yen as well as Buddhist sutras. Because the group meets in a private home, it is strongly advised to call ahead before a visit. In addition to its regular weekly meditations, the Austin Chapter of Dharma Drum Mountain sometimes has one-day meditations. One-day meditations serve to emphasize the the organization’s philosophy that Ch’an (Chinese Zen) is a way of life.

The Dharma Drum Mountain Buddhist Association (DDMA) is an international organization based in Taiwan. The group’s founder, Venerable Master Sheng-yen, has received dharma transmission in both the Cao Dong and Lin Ji traditions of Ch’an Buddhism. Master Sheng-yen’s vision is for Buddhism to be understood by the general public and to be applied to daily life.
Jason Wey has been involved with DDMA for twenty years and founded the Austin chapter in 1993. The group has met in various private homes over the years, including a farm house in Georgetown (a suburb of Austin.) Today, the group meets in Jason Wey’s new home, which features a large meditation room on the top floor. Although Jason facilitates and organizes the group, he is not a religious leader and is advised by Venerable Guo-Yuan Fa Shi, a local disciple of Master Sheng-yen.

In the Austin chapter of DDMA, meditation is usually conducted in both Chinese and English. Similarly, Master Sheng-yen has published many books in both English and Chinese. The group’s size tends to increase during the school year with college students who are interested in Buddhism and meditation.

When Jason Wey began looking at new homes in 2002, he was interested in a floor plan that would allow for a meditation room. The third floor of Mr. Wey’s current home is a large meditation room with hardwood floors. One end of the room is equipped with statues of the Earth Store Boddhisattva, Sakyamuni Buddha, and Kuan Yin. The other end of the room features large bay windows overlooking the Texas hill country. The meditation room also has a library of Buddhist texts and a storage space with cushions and other equipment for meditation.

Several member of the Austin chapter of the Dharma Drum Mountain Buddhist Association are also involved with the International Buddhist Progress Society. Both groups reflect different lineages of Ch’an Buddhism. Vickie Fu, who is a member of both groups, commented that Dharma Drum Mountain emphasizes meditation while the International Buddhist Progress Society’s Xiang Yun temple is a place of worship-and so there is no conflict between the two practices.