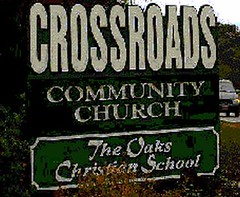 Throughout the week, there are weekly home groups, prayer groups, classes, and recreation (basketball, softball, golf tournaments). Crossroads Community Church has its own school, with grades kindergarten through sixth, called the Oaks Christian School. Classes meet at the church and are taught by church members. Crossroads also owns a 55-acre horse farm that was given by an anonymous donor. It is now used to host retreats, conferences, prayer meetings, dinners, church activities, foster family outreaches, and a pastors’ restoration ministry. The community also supports a variety of foreign and local ministries both financially and through volunteer work.

Crossroads Community Church began on December 10th, 1990, as a small group of people meeting in a local home. They were sponsored by the First Baptist Church of Jedburg. The group later moved to the lobby of a Holiday Inn in Summerville with Rev. Peppy DuTart as their founding pastor. They met for almost two years in the Holiday Inn, holding regular Sunday morning worship and Bible study as well as Wednesday night home groups. They then moved to the auditorium of Rollings Elementary School before finally constructing their own building.

Crossroads is still a very young church, with most of its membership comprised of families with young children and teenagers. There are a few elderly members as well.

Crossroads operates out of a very modest building in which the sanctuary doubles as a gym and the Sunday school rooms double as classrooms during the week. The grounds also feature a small prayer garden for meditation and prayer as well as a playground for the children. There are a few trailers in the back that are used as Sunday school and youth group classrooms. The setup is modest because the Crossroads community does not believe in going into debt for the sake of appearances. The grounds continue to be upgraded as funds become available.