This profile was last updated in 2010 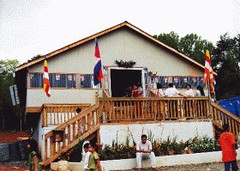 For lay Buddhists, preparing food and feeding the monks are ways of earning merit in order to prevent or decrease their number of rebirths. In Theravada Buddhism, monks can only eat two meals a day– breakfast and lunch– because they are not allowed to eat solid foods after noon. Monks are not permitted to make their own food, so in temples such as this one the women traditionally prepare the food while the men serve it to the monks. The food is usually vegetarian. In monasteries in Cambodia, monks go around the community with begging bowls collecting food. But in this community in South Carolina, food is brought to them in the temple by community members following the schedule above.

Special Gathering Times: On full and half moons, Memorial Day, Thanksgiving Day, Christmas Day, and New Crop Days temple members gather to give thanks and praise while meditating.

Sao Corn, the head monk, teaches and meditates at the temple and in prisons. He hopes to nurture the goodness in mankind. He also visits people’s homes to comfort, counsel, and pray with them in their times of need.

This temple was founded in 1998 as a center where Cambodians could gather to share ideas, language, and memories of their heritage.

In a joint effort led by the Venerable Sao Khon Dhammathero, president of the USA Khmer Buddhist Monks Association, and the abbot and Founder President of Wat Trairatanarm in North Chelmsford, Massachusetts, two small pieces of relic of the Buddha are now housed permanently at the Khmer Temple of Watsaosoksan in Wellford, South Carolina. Venerable Dr. Pollamure Sorata, a monk residing in Anuradhapura, Sri Lanka is credited as the discoverer and procurator of the relic at the behest of the aforementioned gentlemen. Venerable Sorata explains that the relics are two authentic bone fragments which remained after the Buddha’s cremation. He spent a year in Sri Lanka searching for a certified relic such as these. The Jayavarman VII historical pagoda/stupa was built for the purpose of housing the relic vessel which is a shiny gold-plated relic “casket” that houses the relics along with precious gemstones. The pagoda is brick red with ornamental gold trimmings.

A grand and auspicious three-day celebration was held to install the relic vessel in its new resting place, which took place from July 2, 2010 until July 4, 2010. In preparation, some of surrounding woods were clear-cut to accommodate the hundreds of people who were expected to attend, and a huge tent was constructed to house visiting monks. The temple was decorated with flags from many different countries. Independent venders selling clothing, jewelry and food were set up outside the main ceremonial area. A stage was set up in front of the pagoda for speakers and performers and small sand mounds with flags surrounded the pagoda. There was also a separate smaller altar for visitors to offer Buddha puja.

The festivities were attended by approximately 400 monastics (both Theravadan monks and nuns) from all over the world, and around 600 laity, pilgrims and visitors. The South Carolina National Guard was in attendance as part of the relic procession and also to provide security. The relic procession consisted of decorated flatbed trucks and SUVs. One truck held the relic vessel and three monks while the other trucks held Sri Lankan musicians or women in traditional ceremonial wear. The SUVs held national guard soldiers and monastics. The procession began at the Khmer temple and traveled through the town of Wellford to the National Guard installation and back to the Khmer temple where pilgrims and other laity stood on either side of the road with bouquets of carnation flowers in hand waiting to throw flower petals over each passing car. The relic was then removed from the vehicle by monks and a long procession of monastics and laity on foot circled the Jayavarman VII pagoda/stupa. Guest speakers included Venerable Aja Sao Kohn (the most senior Khmer monk in the United States), Wellford Mayor Sallie Peake, Wellford Police Chief Chris Guy, Chief of the National Guard of Wellford, Cambodian Ambassador to the United States and the Cambodian Consulate representative. Bhikkhuni Sudhamma, resident nun of the Carolina Buddhist Vihara in Mauldin, South Carolina, was invited to speak during the candlelight ceremony.

The entrance to the Khmer temple is on a narrow country back-road of Wellford, South Carolina. A white picket fence surrounds the front half of the property which encompasses at least a hundred acres. At the entrance is a small sign in Cambodian language and two gold-painted lions on either side of the entrance. The path to Khmer temple is a long dirt road, large enough to adequately hold the hundreds of vehicles which attended the Buddha relic and stupa inauguration in July 2010. Members of the community built the temple building and angel house. The wooden structure is a two-story building supported on log beams. Inside the wooden temple, is a medium-sized hall with a large statue of the Buddha sitting upon an altar.

The temple and adjoining land were purchased through donations by the congregation. Erected directly in front of the temple is the Jayavarman VII pagoda/stupa which was constructed to enshrine two first-degree relics (the bone fragments from the Buddha’s body). The temple is surrounded by forest, but there is a path through the woods past the temple with a huge rock that has had an altar built upon it. According to locals, the rock marks a place where some confederate soldiers died, and the altar was built to appease their spirits.

The foods served at the temple include Cambodian, Thai, Vietnamese, Laotian, and Chinese dishes. Women prepare food for the monks when they are at the temple at 7:00 A.M. and 11:00 A.M.

Sao Corn, Head of the United Nations of Cambodian Monks

Affiliation with Other Communities/Organizations

The temple is not affiliated with any particular organization. The Oriental Supermarket located off of Asheville Highway is an important component of the temple, because food is purchased for the temple through this store.