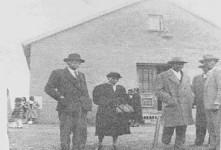 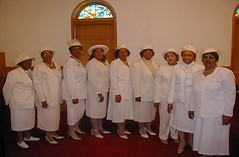 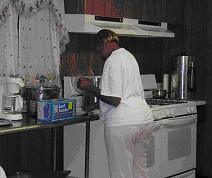 Cleveland Chapel Baptist Church was established in June of 1912 by a Prayer Band Group. Mrs. Maggie Clark Wiggins led the prayer gathering and set a legacy in motion for women of the church. Later that year the group was granted land on which to establish a place of worship, and the church was launched in 1913. Reverend J.W. Wilburn was the first pastor and member of the building group. Reverend J.H. Gilmore, the third pastor, served for twenty years. During this time, the church was refurbished and church membership rose. Reverend M.H. Hackett is the pastor who is credited with the improvement of the church’s financial status. He is also responsible for the first choir and the purchase of the church’s first piano.

In 1950, thanks to the contribution of Reverend Rapor fund-raising efforts, the wooden frame church was bricked, but it was Reverend Whitmire who envisioned the building of a new church and began a Building Fund. Finally in 1970, the church property was exchanged for another property. Reverend Watts oversaw the building of this new church which was dedicated in 1970. Tragically, in 1972, a fire struck this new church. Reverend Whitmire said of this event, “Although we lost the building, we have not lost the Church; the Church is still in each one of us, thanks be to God.” Reverend B.I. Watts began building a $60,000 new church soon after the devastation. It was completed in 1973. Nine years later, the church burnt the mortgage to celebrate its retirement. In 1985, a new building program was begun in which many new items were purchased for the interior of the church. The old building was removed a year later and the Cleveland Chapel Cemetery was constructed.
In 2000, Reverend Barry W. Brown added a Family Life Center to Cleveland Chapel. In 2002, Reverend Timothy J. Brown, Sr. was declared pastor of Cleveland Chapel. Membership has nearly doubled since his installation and he is currently the leader of this congregation, making Cleveland Chapel’s eleventh pastor since its foundation. Today the church is concentrating and looking forward to growth in the areas of ministry for men, women, children, singles and couples as well as the prospect of a new building project.

The congregation of Cleveland Chapel Baptist Church is compromised of a variety of people. The majority of members are African-American. There is an abundance of age groups present at services. This ranges from new-born babies to lifetime members. There is also a small group of teenagers who attend services and sing in the choir, as well a group of young adults probably in their 20-30s. The majority of members are middle-aged but there is also a sizeable portion of senor members.

Cleveland Chapel Baptist Church is situated on a country road in Chesnee, South Carolina. The sanctuary projects into a parking area while the community center/gymnasium and kitchen extend behind the main building. Offices and choir rooms are above the cooking areas.