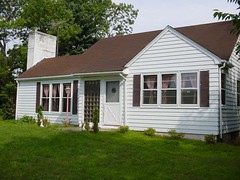 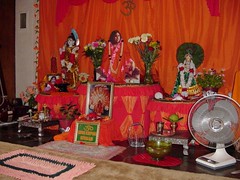 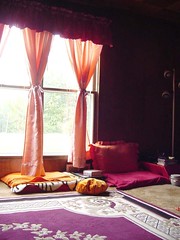 The Bharat Sevashram Sangha of New Jersey is one of six regional centers in North America. Other centers are located in Canada, England, Guyana and Fiji. In India, there are over 150 centers, and approximately 650 monks belong to the entire organization. The home of the Bharat Sevashram Sangha is in Calcutta, India. The movement was started in 1917 by Swami Pranavananda. The North America branch of the Bharat Sevashram Sangha in New Jersey goes back to 1995, when Swami Amarnathananda came from New Delhi, India to Queens, New York, as an assistant to Swami Vidyananda. In 1997, Swami Amarnathananda moved to an apartment in Jersey City, where he held classes on the Bhagavad Gita, performed home pujas for families in North Jersey, and also performed festival Pujas on holy days in rented halls in
Paramus and Hackensack. As the community following grew and matured, Swami Amarnathananda began to plan for a monastery in New Jersey, where he and other monks of the Sangha (community) could reside, and which could serve as a base for the
community. A capital campaign began, and members were told to seek property that struck a balance between rural serenity and convenient access. After inspecting over 20 possible properties around the state, a house on two acres in Kendall Park was purchased for $260,000 in September of 2000. The community plans to build a temple/community center on the front of the property, and the current house will remain as the monks’ quarters. The new center will contain worship and educational spaces, as well as a kitchen, bookstore and library.

The Bharat Sevashram emphasizes Karma Yoga, service in action to others. Swami Amarnathananda summarized it as “serving God by serving Humankind.” He reported that the ideal is to develop the best qualities in human kind, and
also a hunger to know God.

Attendance ranges from 30-40 people on an average weekend, to as many as 300 members on festival days. The center has a main worship area in the house, one side of which is devoted to the images used in worship. In the center is a large picture of Swami Pranavananda, the founder of the movement. Directly to his right is a statue of Lord Shiva, and one of Lord Krishna on the other side. There is also a picture of the Goddess Kali near the image of Shiva. Pujas are offered daily, and arthi is performed. Mantras from the Vedas and Tantras are used in all pujas. Other activities include classes in spirituality, Yoga, and Indian languages. Swami Amarnathananda travels extensively during the week to members’ houses, sometimes to other states in the region.

Special thanks to Brian Tucker for his assistance.
We apologize if you have been experiencing outages with our website. We are working on fixing this in the short term and we will be launching an improved website early in 2020 that will not have the same issues. Thank you for your patience!
X