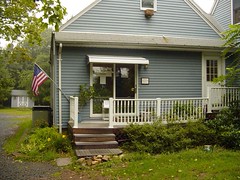 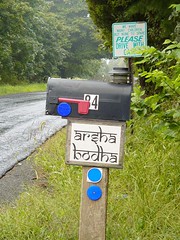 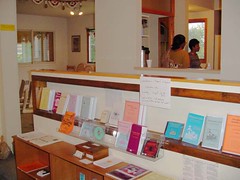 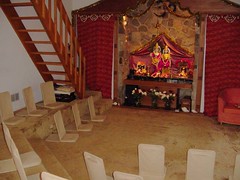 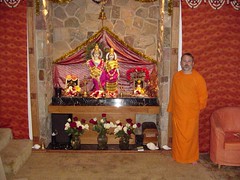 The Arsha Bodha Center was founded by Swami Tadatmananda in 2000. Its parent organization is the Arsha Vidya Gurukulam, of Saylorsburg, Pennsylvania (www.arshavidya.org), a large residential institute for the study of Vedanta, Sanskrit and Yoga founded by Swami Dayananda Saraswati in 1986. Both are related to the Arsha Vidya Gurukulam in Coimbatore, Tamil Nadu, South India. The Arsha Bodha Center is financially independent of the other two institutions. For some time, there had been a felt need on the part of the Arsha Vidya community for more outreach to the Hindu community in New Jersey. Members acknowledged that there are many Hindu temples in New Jersey, but not enough educational opportunities for practitioners to learn about Indian philosophy and Hindu teachings. The Arsha Bodha Center is an ashram, or educational facility, where practitioners can take classes on Hindu scriptures such as the Bhagavad Gita, and the Indian philosophical system called Vedanta, as well as classes in yoga and the Sanskrit language. The emphasis is on teaching Vedanta to practitioners and their children.

In the summer of 2000, the Board of Directors incorporated the center, and a three-acre property, including a medium-sized house, was purchased in a rural part of central New Jersey. That fall, the center was inaugurated and classes began. In the spring of 2001, a gravel parking lot was constructed, and a sunroom was added to the back of the house as an expansion of the lecture hall. In the spring of 2002, the Board met with town officials and applied for permission to redesignate the property as a religious, non-profit facility, and eventually build a separate 5000-square foot lecture hall on the property and 120-space parking lot. That fall, the town approved the plans, and the center celebrated a groundbreaking ceremony. Fundraising began, and so far, over $400,000 of a total $600,000 has been raised. As of November, 2003, construction has started. Projected completion is summer, 2004.

Swami Tadatmananda is a disciple of Swami Dayananda Saraswati, a distinguished traditional teacher of Vedanta from India, since 1981. He came to the Gurukulam in Saylorsburg in 1986 and studied Vedanta there until 1990. He was manager of the ashram until 1993, when he was ordained and became a resident teacher. He continued to teach there until 2000, when he left to start the Arsha Bodha Ashram. Swami Tadatmananda and a handful of volunteers have been busy doing most of the paperwork and facilitation of the development process for the center. He stresses education and the practical translation of Vedantic principles into devotees’ lives. Many Indian families who are concerned to have their children learn and make Vedanta’s teachings their own respond to his accessible pedagogical style. He lives on the premises.