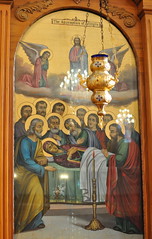 Dormition of the Theotokos

The Saints of Boston: Icons of Eastern Christian Churches in Greater Boston
Pages: 1 2

Every Good Friday, Massachusetts Avenue in Central Square, Cambridge, is momentarily blocked off, and two Eastern Orthodox church processions meet. The congregants of St. Mary’s Antiochian Orthodox Church—founded by Syrian and Lebanese immigrants eighty years ago—march from Inman Street. Members of St. Constantine and Helen Greek Orthodox Church process from just a few blocks away on the other side of the Square. Ushers holding a flower-adorned sepulcher, symbolizing the tomb of Christ, lead each procession. Icons rest in the arms of altar servers. When the tombs mirror each other by a few feet, the communities converge, the priests alternate sprinkling the crowd with water and oil and the choirs exchange hymns. Soon all present sing as one. Cars and pedestrians continue along Massachusetts Avenue, wondering what they have just witnessed, some slow down, some fall in line with those who hold candles.

Orthodox Christians are proud of the long history of Christianity within their respective cultures. This is evident when surveying the names of many Orthodox churches in Boston. The Ukrainian Orthodox community of Boston chose St. Andrew as the namesake of their parish in Jamaica Plain. St. Andrew was the first apostle commissioned into Jesus’ discipleship and is believed to have reached modern day Ukraine in his travels. St. Mark’s Coptic Orthodox Church in Natick honors St. Mark the Evangelist, who is considered the founder of the church in Egypt. The Serbian Orthodox Church in Cambridge, consecrated in October 2009, was dedicated to St. Sava. In the early thirteenth century, St. Sava became the first hierarch of the independent Serbian Orthodox Church when the Patriarch of Constantinople elevated him to the office of Metropolitan.1

The organization of the Orthodox Church is based on the structure of the church in the Christian Roman Empire, where local churches were gathered under the jurisdictions of regional bishops, who in turn were under one of the five patriarchs, situated in the major metropolitan centers. This “pentarchy of patriarchates”2 included: Rome, Constantinople, Alexandria, Antioch, and Jerusalem. The Roman See was considered the “first among equals” by the other patriarchs until the Great Schism of 1054, after which the Latin Church was no longer in communion with her Eastern brothers. Within the Eastern communion, this honor was later passed to the Patriarch of Constantinople. Subsequent autocephalous, or self-governing national churches, were added to this federation, such as the Russian Orthodox Church in the sixteenth century, now the largest Orthodox Church in the world.

When Orthodox Christians began to immigrate to America in large numbers during the early twentieth century, the immigrants were inclined to celebrate liturgy in their native language, maintaining the liturgical particularities of their cultural traditions. Having established settlements in Alaska, the Russian Orthodox Church was the first Orthodox Church in the New World. As a result, prior to World War I, Orthodox churches in North America were de facto, despite ethnic association, under the ecclesiastical authority of the Moscow Patriarchate. After the confusion induced by World War I and the Bolshevik Revolution, churches began retaining and reestablishing their organizational ties with their mother churches abroad, resulting in overlapping American jurisdictions that still exist today.

Boston presents a good example of this diocesan diversity. Within Greater Boston, the following Eastern Orthodox Churches are represented: Albanian, Antiochian, Bulgarian, Greek, Romanian, Russian, Serbian, and Ukrainian. Early twentieth-century Boston saw waves of immigrants from the Middle East, and North and South Eastern Europe and thus many Eastern Orthodox churches in the area were founded in this period. As the world ushered in a new millennium, many churches have rung their bells in celebration of their centennial: Annunciation Greek Orthodox Cathedral of New England in Allston in 2003; St. John of Damascus Antiochian Orthodox Church in Dedam in 2007; St. George’s Albanian Orthodox Cathedral in South Boston in 2008; and Holy Trinity Orthodox Cathedral of Boston—founded by Russians and Austro-Hungarians—in 2010. St. Mary’s Antiochian Orthodox in Cambridge marked their eightieth anniversary in 2008.

In the mid-twentieth century immigrants from India and Egypt began to settle in Boston seeking higher education and more promising jobs. St. Mary’s Indian Malankara Orthodox Church in Maynard was founded in 1973, only the second Indian Orthodox church in America. St. Mark’s Coptic Orthodox Church in Natick was founded during this same period. St. Mark’s community is now served by six priests and includes a retreat center in New Hampshire, the Holy Virgin Mary Spiritual Vineyard. With the more recent influx of immigration from Northern Africa, and the growing Ethiopian presence in Boston, the drums of St. Michael’s Ethiopian Orthodox Church have been beating since 1989. Along with the Armenian and Syrian Orthodox churches in Boston, these communities are members of the family of Oriental Orthodox Churches, a group of churches that only recognize the first three Ecumenical Councils.

Greater Boston is a major cultural center for both the Maronite Catholic Church and the Melkite-Greek Catholic Church, communities of primarily Middle Eastern descent. These Eastern Catholic Churches are sui juris, or “of one’s own laws,” churches of the Roman Catholic Church. Our Lady of the Cedars of Lebanon Maronite Church in Jamaica Plain is the oldest Maronite community in America. (The Maronite Church derives its names from Maron, a fifth century Syriac monk.) The Annunciation Melkite-Greek Cathedral in Roslindale is the ecclesial headquarters of the Eparchy of Newton that encompasses the entire United States and is led by Archbishop Cyril Salim Bustros. The Roslindale headquarters also includes a publishing house, Sophia Press, and St. Gregory the Theologian Seminary, the only Melkite-Greek seminary in the United States.

Boston acts as an ecclesiastical see in many Orthodox Churches, the administrative center of a diocese, where a bishop resides and oversees other churches in the region. Within the Orthodox Church in America—an independent church of the Moscow Patriarchate—His Grace Nikon is the Bishop of Boston, as well New England and the Albanian Archdiocese. In the Greek Orthodox Archdiocese of North America, His Eminence Metropolitan Methodios of Boston is the bishop and spiritual leader of over 200,000 Greek Orthodox Christians throughout the North East and Mid-Atlantic states.

Metropolitan Methodios’ offices are located at the Hellenic College and Holy Cross Greek Orthodox School of Theology in Brookline. This seminary serves the Greek Archdiocese of America, a province of the Patriarchate of Constantinople, and the largest Eastern Orthodox Church in the United States. While most students are from the Greek Diocese, the seminary also trains clergy from other Orthodox and Oriental Orthodox jurisdictions. Its printing press, the Holy Cross Orthodox Press, has published over 500 books on Orthodox Spirituality. Every Thursday, vespers are held in Arabic in the seminary Cathedral and the 52-acre campus is often used as a retreat destination for Pan-Orthodox events and youth groups throughout the East Coast. One of the eights schools that comprise the Boston Theological Institute, the seminary annually hosts academic conferences and ecumenical events on interfaith dialogue.

The Orthodox churches of Boston have continued in the tradition of their strands of Orthodoxy but have both grown into congregations of diverse ethnicities. Many of these churches pull members from different Orthodox backgrounds. St. Mary’s Antiochian Church in Cambridge now maintains a large Eritrean membership. At the Holy Trinity Orthodox Cathedral in Boston, fifty percent of the congregants are converts. Many Orthodox churches hold annual bazaars that feature their ethnic heritage through cuisine and dance. These events help establish the parishes in their respective communities and often attract visits from Orthodox Christians that are not members of their community.

Though more fractured than many American Orthodox Christians wish, Orthodox Christianity in Greater Boston boasts a rich and diverse community, and faces many of the same challenges in the future. Like the converging processions in Central Square every Good Friday, the Orthodox churches of Boston walk together in theology and practice. Though onlookers may gaze with eyes of astonishment, Eastern Christianity is well established in Greater Boston.

This ethnic diversity of Eastern Christianity in Boston is evident in the icons that grace the churches, from the hard lines of Byzantine iconography to the soft portraiture of the Ethiopian style. Icons hold a very important place in Eastern Christian worship and theology. These “windows into Heaven” as St. John of Damascus described them, do not merely serve the purpose of decoration nor do they simply illustrate scripture. The current Ecumenical Patriarch Bartholomew of the Eastern Orthodox Church writes that icons are “faith depicted in color, simultaneously constituting part of the transfigured cosmos.”3 The veneration of the icons of Christ, of the Mother of God, of the saints and angels, and of scenes from scripture, demonstrate the Christian dogma of Christ’s Incarnation. Eastern Christians believe the Incarnation of the Son of God revealed to all humanity the image of the Father. When God took human form the entire material world was made holy, the cosmos transfigured. Saints are thought to achieve deification in their lifetimes through the emulation of Christ, fulfilling the role of humanity as created in the image of God. Icons—which in Greek translate as image, likeness, or portrait—are thus images of the images of God.

The artists of these sacred images are held to high spiritual standards and must follow traditional rubrics in what they portray. The style is not intended to mimic pictures but rather depicts the “Kingdom within.” Christians do not worship the paint or wood or the figure depicted, but instead the spiritual reality of the one God to which the images and the liturgy lead. Though Eastern Christians venerate icons in their homes, icons cannot be separated from their liturgical context.

In churches icons are often arranged in iconostases. The iconostasis—literally translated in Greek icon stand—is often rendered in English as an icon screen, since it is thought to provide not a barrier but a threshold between the altar and the church nave, where the congregation resides. From entering a church in the narthex, to standing before the nave, to gazing at the iconostasis, to partaking of the sacrament of Holy Communion, the church symbolizes a vertical ascent from earthly to heavenly realms. St. Simeon of Thessalonica wrote: “the narthex corresponds to earth, the church to heaven, and the Holy Sanctuary to what is above heaven.” Upon approaching the Holy Sanctuary, the faithful are greeted by a reflection of humanity through those who have been deified—familiar figures that are believed to guide them still further to the unknowable God.

Though the form and height of these icon screens varied in the ancient church—from solid structures reaching elbow height to lattice work to architraves sets on a row of columns—they grew more complex by the 14th century. Inspired from the triptych frescoes of the deesis, or Jesus flanked by John the Baptist and the Virgin Mary, templon screens is Russia were soon built with many levels, later spreading to the other Orthodox churches. By the sixteenth century, a common organization of images was established. The center doors, or the royal doors, often depict the four writers of the Gospels and/or the Annunciation. To the left of the royal doors, the mother of God reigns, indicating Christ’s Incarnation, while to the right of the door sits Jesus enthroned, the Panocrator, symbolizing Christ in the majesty of his Second Coming. John the Baptist and the namesake icon of the church often occupy the other panels of this row. The following tiers depict the liturgical feasts or scenes from the life of Jesus, then an extended version of the deesis, then rows of prophets, then rows of patriarchs, completed by the Cross.

For a journey through the various icons venerated at churches in Greater Boston, click here.