Stephanie Saldaña was a student at Harvard Divinity School when she began researching religious diversity in San Antonio, Texas. Saldaña’s project aimed to find out what happens when a bi-cultural city becomes multi-cultural. By visiting Sikh, Baha’i, Muslim, Buddhist, and Christian communities, she discovered that, while much of America is becoming increasingly diverse, the religious landscape of San Antonio is changing in a special way. Hispanics are pioneers in the Buddhist community. Baha’i worship combines Spanish, English, Persian, and Arabic. And every year the San Fernando cathedral holds an interfaith Thanksgiving service, where Muslims, Christians, Sikhs, Hindus, Buddhists and Baha’is all gather to give thanks for their city’s diversity. While much of Texas is conservative, new immigrants in San Antonio are finding that their presence is embraced, viewed as another level in an already diverse local fabric, and welcomed into the public sphere. In a city where religion has always played a central role in public discourse, today an interfaith delegation blesses each new City Council and reminds them of their duties.

San Antonio may always be known as a city famous for its Latin American heritage. But in her profiles, interviews, slide show and photos, Saldaña hopes to give some sense of the fact that San Antonio has become increasingly multi-cultural. And from the Texas flag hanging outside of a Thai Buddhist Center to the Texas flags adorning the basketball hoops outside of the Islamic Center of San Antonio, it is clear that members of these communities, while holding onto their traditions, are as proud to be Texan as their neighbors.

San Antonio has been historically known as a bi-cultural city, a vibrant community rich with Latin American traditions. With 59 percent of the local population descending from a Spanish-speaking country, San Antonio is a place where Spanish and English are spoken side by side, where the community gathers to celebrate Posadas and Cinco de Mayo, el Dia de Los Muertos and the annual Fiesta. Religion has also been, quite literally, at the heart of the city, with the San Fernando cathedral, built in 1738, still marking the official city center.

From Bi-cultural to Multi-cultural: Religious Diversity in San Antonio, Texas 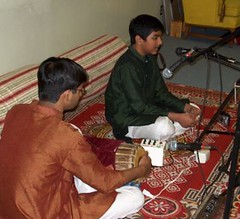 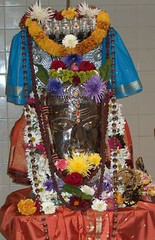 Saldaña filed the following report at the conclusion of her 2004 summer research  with the Pluralism Project:

Religion has always been, quite literally, at the center of San Antonio’s identity. In 1731, a group of 15 families traveled from the Canary Islands to this remote Texas settlement at the invitation of King Phillip V of Spain, charged with the task of preventing French incursions West of the Mississippi into Texas. Seven years later, these Canary Islanders placed the cornerstone of San Fernando Church, the first Parish in Texas, and declared the center of the cathedral as the official center of the city of Ville San Fernando, and the point by which all mileage was calculated. Over 250 years later, San Fernando Cathedral still stands at the heart of the city of what is now San Antonio, marking the official city center, and continues to be the first stop for many of the thousands of Hispanic immigrants who make their way to the city each year.

What does it mean for a Spanish cathedral to be at the heart of an American city? For the five thousand mostly Spanish speaking parishioners who worship at San Fernando each week, the cathedral is a pledge that the city will never forget its history and the vibrancy of its diversity. For the over one million inhabitants of greater San Antonio, 59 percent of them Hispanic, it means that religion will always be at the forefront of how the story of San Antonio and its people is told and remembered. Today, while so many American cities are set on projecting an image of the future, the heart of San Antonio remains anchored to the past. Masses at San Fernando are held in both Spanish and English, with a bilingual choir and mariachi masses each weekend. Behind the altar, a statue of Our Lady of Guadalupe, the patroness of Mexico, welcomes visitors from Mexico, just as the statue of El Christo Negro, a replica of the Black Christ from Esquipulas, Guatemala, opens his arms to receive personal notes from parishioners asking him for miracles. Here, in the heart of San Antonio, are the stories, the songs, the beliefs, and the prayers of San Antonio’s Hispanic community. As David Garcia, the rector of San Fernando Cathedral, has said, the cathedral is “ a book to be read.”

This story of religion at the center of San Antonio is a “book” I have been reading for most of my life. My ancestor Juan Leal Goraz was among those 15 Spanish families who sailed from the Canary Islanders to San Antonio in 1731, and for my family, living in the city 15 generations later, the cathedral at the center of San Antonio has always been a matter of pride. For us, it meant that the story of our immigration to a new country was never forgotten, but was locked in stone. In my childhood, my father often lead me to the circle behind the altar, marking the City Center, and told me, “Your ancestors helped to build that circle.” And like the thousands of immigrants who have traveled from Mexico, Central and South America to San Antonio, who brought their icons and their prayers with them and placed them in the cathedral, we felt that the cathedral was ours, was our home.

And yet it had never occurred to me that, even as San Antonio embraced the story of immigration from Latin America, another story, of immigration from the Middle East and from Asia had rarely been told. If religion is at the heart of the city of San Antonio, where were the stories of Sikhs, of Buddhists, of Muslims, of Hindus, of Bahai’s? When I set out to write the Profiles of Religious Centers in San Antonio, I confronted for the first time a side of my city that I had never known existed, a diversity of vibrant religious communities from Iran, Thailand, India, and the Middle East whose members saw themselves nonetheless as fully “Texan.” At the same time, I found that the Hispanic community was transforming as well, and I encountered Hispanic leaders in the Buddhist and Bahai communities.

Who knew that in the heart of the South Side, beside the Pig Stand, America’s oldest drive-in restaurant, a Shambhala Buddhist Center now stands, which was founded in 1984 by Hispanic San Antonians, and which still caters to both Spanish and English-speaking residents? That outside the city, a beautiful Thai Temple welcomes hundreds of Thai speaking residents to pray in their spacious halls or meditate on paths running beside lotus leaves? Or that beyond the historic Monte Vista District, where some of the city’s oldest and grandest houses hold court, Persians gather with worshippers of all ages at the San Antonio Bahai Center to hear prayers in Persian, Arabic, Spanish, and English? Who knew that in the midst of the San Antonio Medical District, tucked beyond the city’s major hospitals, the San Antonio Islamic Center caters to the needs of 700 Urdu, Arabic, and English speaking Muslims? Beyond the Texas flag displayed prominently on the basketball hoops outside, Imam Yousef, the Center’s vivacious young Imam from Jordan, expresses with enthusiasm his hope that the community will “carry on as American Muslims,” known throughout the city for their hospitality.

Throughout the city, new religious communities are transforming this historically bi-cultural city to one of vibrant multiculturalism, where Buddhist and Christian communities stand side by side, where Muslim leaders are invited to speak in parishes, and where Bahai’s hold an annual festival celebrating the city’s diversity. I was perhaps most surprised by the visibility and vibrancy of San Antonio’s Sikh community, which in the wake of September 11 has emerged as a prominent force, educating local police on Sikhism, teaching local college students about turbans, and holding a local Sikh Camp to teach Sikh youth about their own traditions. At the Gurudwara Sikh Center of San Antonio, I was welcomed by over a hundred Sikhs to a celebration in Punjab commemorating the martyrdom of Guru Arjan Dev Ji. Later, when I asked Harinder Singh, the director of the Sikh Research Institute, if San Antonio’s Sikhs had suffered from violence or hate crimes after September 11, he said that while Sikhs throughout Texas suffered, San Antonio was a city known for its tolerance “This city has a history of being a city that is bi-cultural,” he said. “We want to make it multi-cultural.”

It is this openness to multi-culturalism that makes this once bi-cultural city so unique. Always a city of immigrants, San Antonians seem eager, in large part, to celebrate their new found diversity. By June, Catholic Charities had resettled 134 families in 2004 in San Antonio from Somalia, Bosnia, Vietnam, Colombia, Liberia, Iraq, and Sudan, the vast majority of them Muslim. In fact, this Catholic organization resettles more Muslims in the city than any other organization. I was also not surprised to learn that every Thanksgiving, leaders from the Muslim, Buddhist, Bahai, Hindu, and Sikh traditions take part in an interfaith service at San Fernando Cathedral, where thousands of San Antonians pack the church to give thanks for the city’s diversity. San Fernando Cathedral now also hosts the Interfaith Blessing of the City Council and Mayor every two years, where religious leaders from several traditions bless the city’s leaders and urge them to protect the ability of all citizens to pursue happiness equally.

As San Antonio transforms from a bi-cultural to a multi-cultural city, it is only right that religious leaders of all traditions should gather downtown to become part of the 250 year old story of religion in the heart of a city. That Ramadan and Guru Nanak’s birthday should be part of the fabric of a city which for centuries has been celebrating El Dia de Los Muertos and processing in Posadas. And that Muslims, Buddhists, Sikhs, Hindus, and Bahais should be able to walk with their children, as my father did, to the circle behind the San Fernando Cathedral, which marks the center of the City, and to tell them: “Your family helped build this city.”